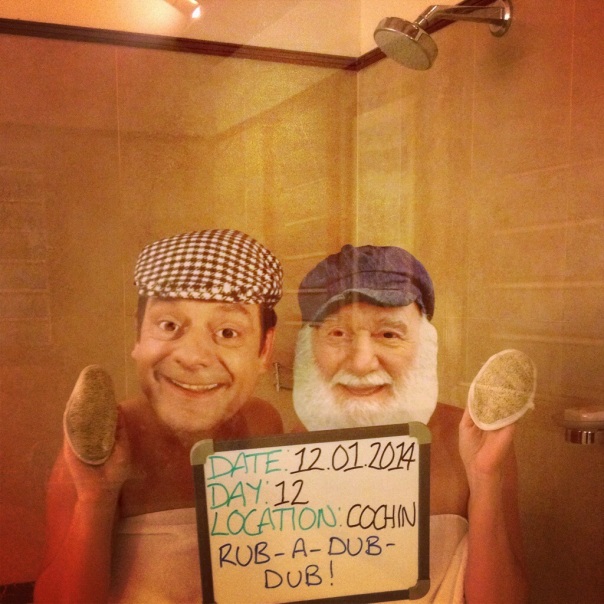 Vatakara to Cochin. This was the beginning of the end. We knew that all being well, we would make it to Cochin today. We would never again be Indian rickshaw drivers. This would be the last time that we would squeeze our packs onto Robbie’s back shelf and coax his sleepy engine to life in the hazy morning light. We gazed at the passing panorama of India’s daily life. We breathed in her sights and sounds and smells and bad air. We would never again witness the largest democracy on earth from this most unique of perspectives.

By the time we reached the city limits of Cochin, the afternoon heat was stifling. Cochin is made up of a number of islands with Fort Cochin, our destination, being located on the furthest point from the mainland. By the time we reached our hotel, the resplendent Tea Bungalow, we were ready. It was time. Time to park up Robbie and unload him. Time for a long shower in a beautiful, clean marble bathroom. Time to watch satellite TV while lounging on crisp white sheets. Time to sleep in a bed rather than on a bed. Time to return to our everyday lives. We were Indian rickshaw drivers no more.

Phrase of the Day:
Driving through Kerala was a new experience. There were big houses, road signs (distinctly lacking in Karnataka) and motorcyclists were wearing helmets (well, at least the drivers were, never mind your 3 children and your wife).
Jodie: Traffic lights?! It’s almost civilised.

Moment of the Day:
Having just commented on the fact that we were yet to see any elephants since arriving in the south, we rounded a corner and there were three. In a petrol station! Only in India. Robbie the Rickshaw meets Nelly the Elephant. Our excitement was more than matched by the crowd of whooping young men. It wasn’t clear whether it was the sight of the Touring Trotters or the carnival atmosphere that had whipped them into such a frenzy. Anyways, this was a moment of Rickshaw Run gold.

Of course, our second moment of the day was our arrival in Fort Cochin. We had made it, and with two days to spare. But we weren’t quite emotionally ready to say goodbye to lovely Robbie just yet. We decided to keep our keys and to cross the actual finish line on 14 January 2014 as planned. We could see our rick from the bedroom window. We all stole the occasional wistful glance out towards him. He had done us proud. And we had done him proud too.

Our top tips for driving in India:
1. Never give way. Never ever. Not even at big roundabouts and major junctions. Unless what’s coming towards you is very big. Or moving very fast.
2. Don’t bother with your wing mirrors. You only need worry about what’s happening immediately in front of you. What’s going on behind is not your concern. Unless what’s behind you is very big. Or moving very fast.
3. The horn is your best friend. Use it liberally. Sound it at anything in the road. Or near the road. Don’t be shy.
4. Undertaking is always a good idea. Especially if the other vehicle is bigger than you. Even more so around tight bends on steep hills.
5. Don’t worry about blind bends or summits when overtaking. Don’t let the oncoming truck concern you. Whether you survive this road trip or not is down to karma. Just go for it.
6. Lane discipline? Are you having a laugh? Every road junction is a cluster-f*%k. Get involved.
7. Forget your indicator lights. Nobody’s paying any attention. If you really must signal, use your arm. But don’t bother. And working brake lights are a rarity.
8. Stop anywhere you like. In the middle of the road. On roundabouts. At busy junctions. The road is your parking space.
9. Ignore all the conventional rules of the road you thought you understood. Driving the wrong way up the carriageway? U-turns across several lanes? Careering down the hard shoulder? Animals roaming free everywhere? All perfectly acceptable. If it’s likely to endanger life, it’s probably normal.
10. Use only full beam at night. The strength of your headlights is directly proportional to the size of your…ahem. Dippers are for wimps.
11. Pull out of side streets in front of oncoming vehicles. Then drive really sssssslllllloooooowwwwwwlllllllyyyyyyy.
12. Policemen will flag you down. You don’t always have to stop. More often than not they just want to smile at you. Make a judgement call based on the intensity of their arm waving.
13. There are speed bumps everywhere. Even on motorways. They are rarely signposted. If you take these at speed, it hurts. If you take these slowly, it hurts. Suck it up. This is India.
14. Cut in really close. If you can’t hear the intake of breath from the occupants of the other vehicle, you’re too far away. Any gap is yours for the taking.
15. Lose all your inhibitions and manners. Be aggressive. Be brave. Fear. Less.

Question of the Day:
Claire: Why does it smell so bad?
Jodie and Erica in unison: It’s India! 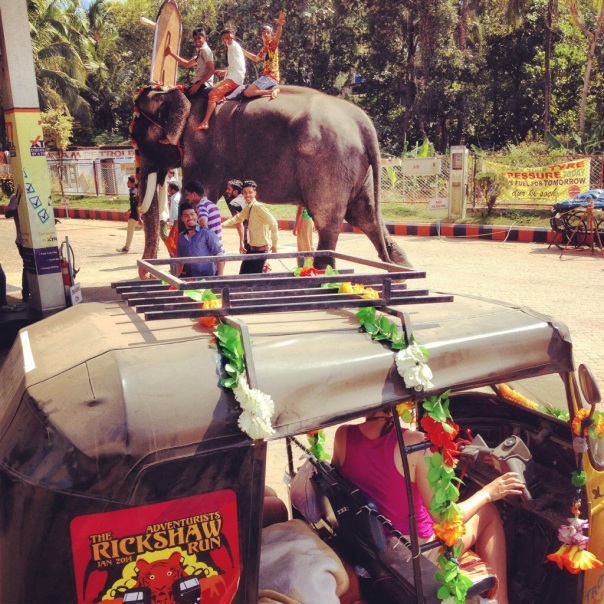