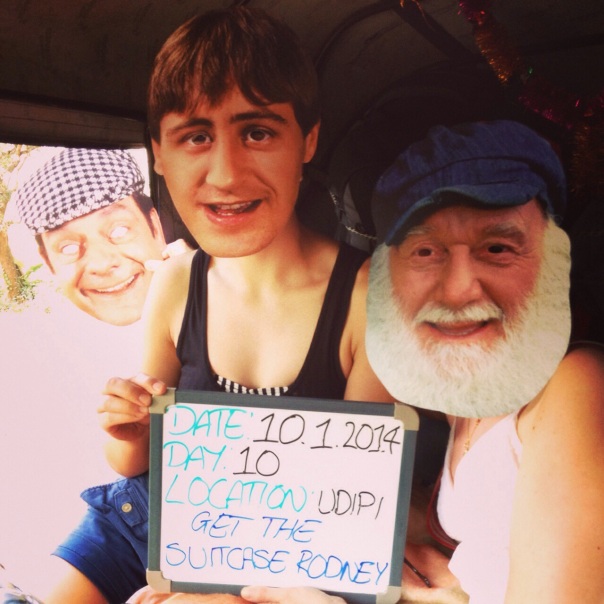 Palolem to Udupi. We didn’t quite match the early start of previous days. It was just too difficult to drag ourselves away from breakfast on the beach. But once on the road, we really flew. This was a day of driving. Dusty, hot, uncomfortable driving. And no music to entertain us, only the chugging of Robbie’s engine. Then out of nowhere that sinking feeling as the chugging faded into silence and our little rick cruised to a halt. Again. What now? Claire had a feeling it could be a blocked fuel line. We unhooked it and blew through it. Still nothing. It was like the blind leading the blind. Only we were the mechanically-challenged leading the mechanically-challenged, fumbling around in Robbie’s rear end.

Then a gleaming white 4WD pulled up. Four gleaming people got out. They had the unmistakable Indian English accent of the wealthy. And they also had a driver mechanic. Oh what happy fortune. It was a problem with Robbie’s fuel line. We just need to blow a little harder. And off we flew again.

In order to keep us awake in the soporific heat of the afternoon, we contemplated our most memorable moments of the run so far. We gossiped. As you may have already realised, 3 girls driving a yellow rickshaw across India attracts a lot of attention. This is often unwanted. We have already mentioned that standing in a cow pat and the direct have sex? approach have failed to impress us. We can now add henna tattooing to that list. Gentlemen, while you may think that having the name of the object of your desire emblazoned on your chest, a grand romantic gesture and a sign of your commitment, we beg to differ. Too much. Chad, a Rickshaw Runner from the USA, should take special note. It takes more, far far more, to win Erica’s affections.

We overnighted in Udupi, famed for its Krishna temple. We gazed at if for at least a few seconds from the surreal setting of the rooftop terrace restaurant, complete with thumping house music, mood lighting and a huge plasma TV screen. The surreality reached mind-altering heights when the call to prayer sounded from a nearby minaret at the very same moment as It’s raining men blasted from the sound system. We hoped that the wrath of Allah for such impropriety wouldn’t impede our progress the following day.

Conversation of the Day
This took place between ourselves and the gleaming family from the 4WD.
The family matriarch (clad in a red and gold sari and hiking boots): Where’s your driver?
Us (in unison): We are the drivers!
The matriarch: No! Where are you going?
Us: Cochin
The matriarch: What?! In this?! Where have you come from?
Us: Jaisalmer
The matriarch: No!

Moment of the Day
We had not long crossed the Goa – Karnataka border. Erica was in the driving seat. Suddenly she exclaimed, ‘Shit, I think I just drove straight across a roundabout!’ Claire and Jodie look back. Uh yes, that would be a huge roundabout at a major highway junction. And we had just gone straight down the right side, instead of clockwise around to the left as convention (and traffic laws the world over) would dictate. Oh well. If you can’t beat em, join em. 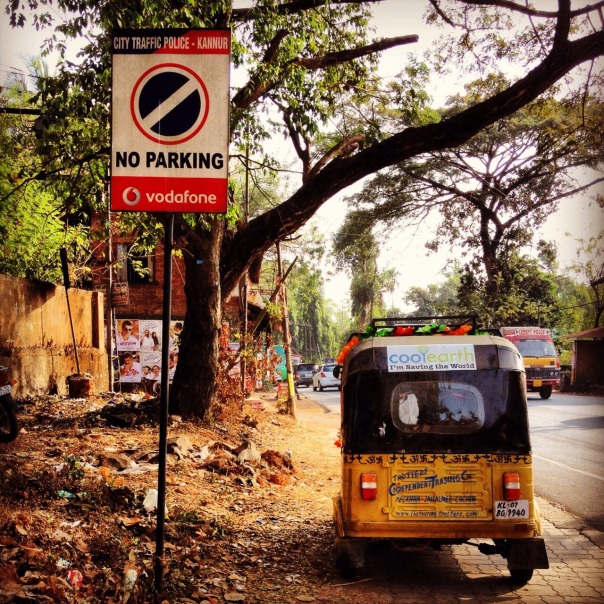