Only Fools and Horses

As Claire, Jodie and Erica all hail from Peckham, the area has become something of a theme for our Rickshaw Run. Only Fools and Horses is one of Peckham’s most (in)famous exports. Our rickshaw will be painted to resemble the yellow Robin Reliant (we’re hoping that it will live up to its ancestor and be reliable, but we fear it will be anything but…) and we plan to set off on launch day dressed up as characters from the show. It’ll be a comedy moment for sure. Lovely jubbly.

Only Fools and Horses is a British sitcom, created and written by John Sullivan. Seven series were originally broadcast on BBC One in the UK between 1981 and 1991, with sporadic Christmas specials until 2003.

Set in Peckham in south London, it stars David Jason as ambitious market trader Derek “Del Boy” Trotter, Nicholas Lyndhurst as his younger brother Rodney, and Lennard Pearce as their elderly Grandad. After Pearce’s death in 1984, his character was replaced by Uncle Albert (Buster Merryfield). The series chronicles the Trotters’ highs and lows in life, in particular their attempts to get rich.

Derek “Del Boy” Trotter (David Jason): Del was an archetypal South London market trader, willing to sell anything to anyone to earn money. A lovable loser, he was sharp-witted, image conscious and an eternal optimist, always convinced that his latest money making scheme would turn him into a millionaire, but invariably a failure because he lacked the required nous to realise his ambitions.

Rodney Trotter (Nicholas Lyndhurst): Del Boy’s brother, naive, much younger and easily-influenced, more academically gifted, although only to the extent of two GCEs, but generally gormless and lacking common sense.

Uncle Albert (Buster Merryfield): Grandad’s long-lost brother, despite claiming to never talk about his past, his long-winded anecdotes about his wartime experiences with the Royal Navy became one of the show’s running gags, usually beginning with the words “During the war…” which resulted in exasperated groans from anyone nearby.

The series had an impact on English culture, contributing several words and phrases to the English language.

Owing to its exposure on Only Fools and Horses, the Reliant Regal van is now often linked with the show in the British media. The one used by the Trotters has attained cult status and is currently on display at the Cars of the Stars exhibition at the National Motor Museum, alongside many other vehicles from British and American television and movies, such as the Batmobile and the DeLorean from Back to the Future. 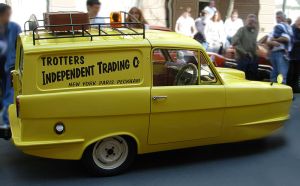