So, Barmer to Palanpur. What can we say? It was Baltic in the back of the rickshaw in the early morning, so much so that Erica took to wrapping herself in the map in order to break the freezing wind. We ate a lot of brown/beige food, all of which went out-of-date several months ago. As we drove south, sandy scrub land gave way to dusty green, the temperature rose, the locals’ vehicles seemed to cut in closer and the backwards staring at us while speeding past became even more hair raising. Perhaps they all need a drink and we’re the most exciting party to have hit these parts since…well, the last Rickshaw Run (Gujarat is a dry state). This really is India’s Wild Wild West.

After a search around Palanpur, we found ourselves in the Way Wait Hotel, the highest rated place to stay in town on TripAdvisor. It doesn’t say much when you consider that Claire didn’t even make it past the front door of one of the other places we tried first before flatly rejecting it (‘this really is my limit of shit hole’). Day 2 was over and we had survived. Tomorrow brings a dash round Ahmedabad and an attempt to navigate past Anand and its prohibited military zone. If you don’t hear from us again, assume we’ve been arrested and are languishing in an Indian jail. Please inform the Foreign Office.

Plonker of the Day
Jodie, for coming out with the following ridiculous utterance as Claire returned from a quick loo break behind the thorn bushes in a sand dune: ‘Did you find a toilet?’. Sure. It was really clean. There was plenty of toilet paper and Molton Brown hand soap. There was even an attendant who gave me a Chupa Chup. In. Our. Dreams.

Moment of the Day
We’re famous! That’s right. Not only are we surrounded by crowds wherever we go but today that same crowd thrust a newspaper into our hands. We’re in the paper! Check us out below. We’re feeling very smug.

A second important moment was our first foray onto an Indian motorway. This was not exactly the M1. Sure, there were speeding lorries and a complete lack of lane discipline. But these things are to be expected. There were also speed bumps, 4-way junctions with no traffic control system, traffic coming willy-nilly the wrong way up the carriageway, cows (of course), dogs and large camels. Surprisingly, the camel carts tended to stick to the hard shoulder, which is pretty civilised by Indian standards. The fact that we think camels on the hard shoulder is ‘civilised’ shows how quickly we’ve assimilated to Indian road conditions.

Mob of the Day
OK, so this isn’t a mob of staring, zombie-like Indian men (although there were plenty of these today), but instead a gathering of bewildered, exhausted Rickshaw Runners in Palanpur and a lack of available hotel space. No room at the inn. Having driven round the town for sometime looking for somewhere to stay, we all had to ask ourselves, who on earth is in these hotels and why would anyone come here? It really was a dusty hole. But a dusty hole with a hotel capacity issue. The result? 8 Rickshaw Runners, 1 hotel room, 1 bathroom and a whole lot of petrol-filled jerry cans (the golden rule: never leave anything in the ‘shaw overnight, especially petrol). Cosy. And a little smelly. 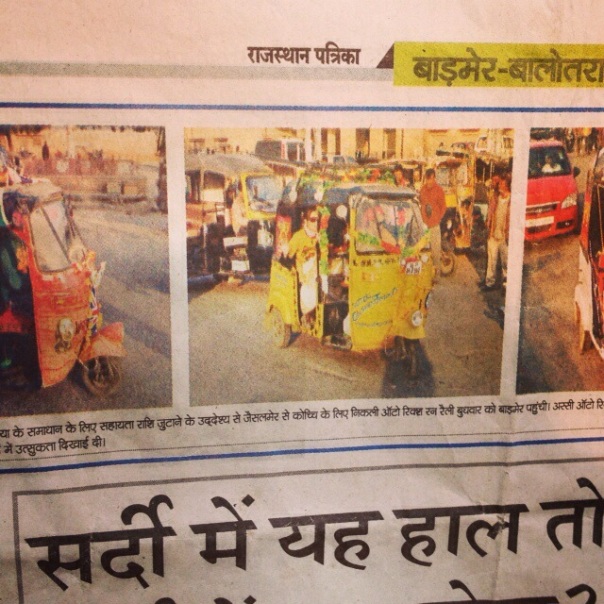